Why is Nitrogen Important?

Nitrogen is a major macronutrient. In most crops it is the primary nutrient affecting yield and plant health. Nitrogen is essential in the structure of amino acids, nucleic acids, proteins, enzymes, metabolic reactions, and chlorophyll (the component that contributes to plants green color). While it exists in many different chemical forms, plants use nitrogen in the soil by absorbing either ammonium (NH4+) or nitrate (NO3-) ions into their roots. Nitrogen fertilizers are applied in either of these forms. The supply and the loss rate of nitrogen from the crop root zone greatly affects crop production. Nitrogen losses are especially significant during early growth stages of the crop when root systems are not well developed. 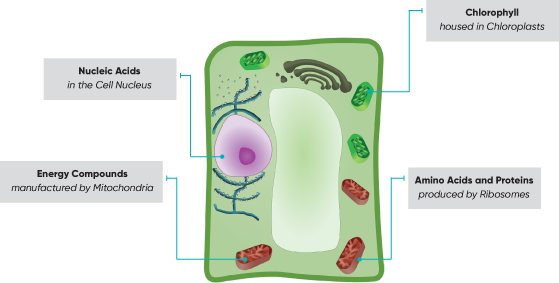 The supply and the loss rate of nitrogen from the crop root zone greatly affects crop production.

How is Nitrogen Lost?

After nitrogen fertilizer application, naturally occuring soil bacteria quickly convert ammonium into nitrate in a two-step process called nitrification. This process is impacted by many factors including soil temperature, soil moisture, and soil pH. However, once converted to nitrates, nitrogen is subject to loss. Nitrate is prone to leaching with precipitation or irrigation. Nitrogen losses commonly approach 25% of the applied nitrogen and can reach as high as 50-60% in some situations (Cassman, 2002). These losses are significant since the global market for nitrogen fertilizer is estimated at 113 million MT (IFA, 2014). It means that costly nitrogen fertilizer inputs are lost to the environment and not utilized by the crops. 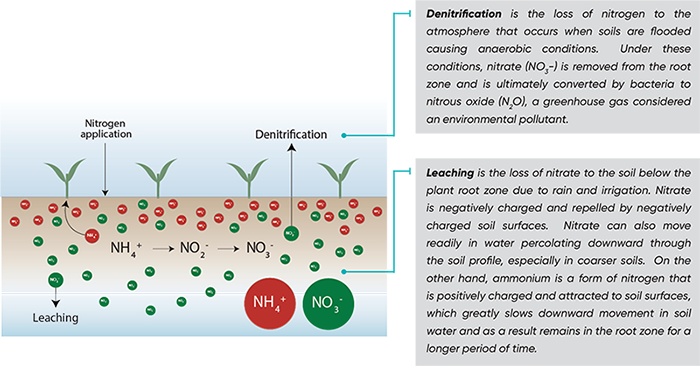 What are the Environmental Impacts?

Nitrogen lost through denitrification or volatilization is a greenhouse gas contributing to global warming and considered an environmental pollutant. According to the US Environmental Protection Agency (EPA), the impact of 1 pound of N2O on warming the atmosphere is nearly 300 times that of one pound of carbon dioxide. The EPA estimates emissions of nitrous oxide gases from the soil to be as much as 16% of the global budget of nitrous oxides in the troposphere. Kyoto Protocol is an international treaty that commits industrialized states to reduce their greenhouse gas emissions by a set goal. Nitrous oxide is one of six greenhouse gases targeted by the agreement.

Eutrophication occurs when water is contaminated with minerals and nutrients that are typically limited in the environment. Nitrates and phosphorous, like those found in agricultural fertilizers, are the most important contaminants driving eutrophication. This excess of nutrients accelerates plant and algal growth supporting large blooms that die off in mass when the nutrients have been used up. The microbial decomposition of dead algal blooms consumes dissolved oxygen faster than it can be replaced resulting in areas of low dissolved oxygen or hypoxic zones. In some cases, dissolved oxygen can retreat to a level that does not support sea life.The Great Barrier Reef (GBR) is the world’s largest coral reef ecosystem. The health of the GBR is under pressure from sediments, pesticides and nutrients (especially nitrogen) discharged from nearby waterways. The Australian sugarcane industry is a significant contributor to the amount of nitrogen entering the GBR. Recent estimates in the Reef Water Quality Protection Plan (2013) suggests the industry contributes approximately 56% of the inorganic nitrogen load. Similarly, in recent years, there has been growing concern about the seasonal hypoxic zone in the ecologically and economically important Gulf of Mexico. This hypoxic zone is attributed to the discharge of nitrates from farms along the Mississippi river. In China, rapid growth has increased the pressure placed on the environment through nitrogen contamination. Nitrogencontaining pollutants from agriculture, transport and industry have increased more than 50% in the last 30 years (Qiu, 2013). One study found that as much as 50% of the nitrogen fertilizer applied to agricultural fields ends up in the environment either leached into ground water or volatilized into the atmosphere (June 2009).

According to the US Environmental Protection Agency (EPA), the impact of one pound of N2O on warming the atmosphere is nearly 300 times that of 1 pound of carbon dioxide.

"The products described in this brochure are required to be registered prior to distribution or sale in many countries throughout the world. In some such countries or their political subdivisions, these products are not registered for sale or use. Contact the applicable regulatory authority for your jurisdiction to determine if a product is required to be registered, and if so, if it is registered for sale or use in your national, state or local jurisdiction. Always read and follow label directions. The Information and recommendations in this brochure are presented in good faith and for general information only. The Information is believed to be correct as of the date presented. However, neither Corteva Agriscience LLC nor any of its related companies makes any representation or warranty as to the completeness or accuracy of any of the Information. The reader assumes the entire risk of relying on the Information. The Information is supplied on the condition that the reader or any other person receiving the Information will make their own determination as to its suitability for any purpose prior to any use ofthe Information. In no event will Corteva Agriscience LLCor its related companies be responsible for damages of any nature whatsoever resulting from the use of or reliance upon the Information or any product referred to in the Information."

"The Information is not to be construed as a recommendation to use the Information, product, process, equipment or formulation that conflicts with any patent, copyright or trademark, and neither Corteva Agriscience LLC nor any of its related companies makes any representation or warranty, express or implied, that any use of the Information will not infringe on any patent, copyright or trademark. Nothing contained herein shall be construed as conferring by implication, estoppel or otherwise any license or right under any patent, trademark or copyright of Corteva Agriscience LLC or any third party."

"THIS INFORMATION IS PROVIDED “AS IS” AND NO REPRESENTATIONS OR WARRANTIES, EITHER EXPRESS OR IMPLIED, OF MERCHANTABILITY, FITNESS FOR A PARTICULAR PURPOSE OR OF ANY"

"“™ ® Trademarks of Corteva Agriscience and its affiliated companies. © 2022 Corteva."