When I first started as a research assistant with Corteva Agriscience™ about 12 years ago, the company had just released the industry’s first-ever clubroot resistant (CR) hybrid. Little did I know then that my career would soon become devoted to identifying and incorporating new effective sources of resistance into our canola hybrids.

Today, as a senior research associate at the Corteva research station in Ardrossan, AB, I’m just one of many team members and global multidisciplinary scientists working to provide stacks of effective genes, as well as products with single effective genes, so Western Canadian growers can rotate clubroot resistant genetics, avoid new virulence problems and have sustainable options moving forward into the future.

Since developing and commercializing the first clubroot resistant hybrid back in 2009, Corteva has been leading the industry. 2021 marked an especially big year for our team as we introduced two new CR packages, CR4 and CR5, that provide protection against the Prairies’ latest predominant clubroot pathotypes while simultaneously offering resistant gene rotation options.

In the almost 20 years since clubroot was first identified outside of Edmonton in 2003, it has spread to thousands of fields in Alberta, Saskatchewan and Manitoba, and today it continues to evolve with new virulent pathotypes being found annually.

To help growers slow the spread of this serious soil-borne disease, my colleague Dan Stanton penned an article on proactive clubroot management strategies. Perhaps the best nugget he shared was this: “Even if the disease is not present in a field, clubroot resistant hybrids are proven to significantly reduce spore propagation or disease establishment compared to susceptible hybrids.”

While Corteva has been beating the drum on this point for years, I’ve been encouraged by how many growers are now proactively deploying resistance before clubroot is even found in their area.

According to Agdata, the planting of CR hybrids in Western Canada jumped from 20 per cent of acres in 2018, to 35 per cent in 2019, to near 50 per cent in 2020, to almost 65 per cent in 2021.1 While we shouldn’t stop until 100 per cent of Canadian canola fields are planted to clubroot-resistant hybrids, this is progress we can all be proud of.

Clubroot has been in Alberta for well over a decade - so, it’s not surprising the province leads the country in planting clubroot-resistant hybrids, at nearly 80 per cent of total acres in 2021, compared to Saskatchewan and Manitoba at about 60 and 55 per cent, respectively (Agdata).2

CR1 (1st generation clubroot resistance) remains an excellent option in fields that have never seen clubroot and where CR genetics have not been used before. However, if clubroot has been found in the area, growers should ask their agronomist or county reps if a pathotype shift has been identified. While CR1 has been incredibly effective at slowing the spread of clubroot, Alberta and small parts of Manitoba have experienced spikes in virulent clubroot pathotypes after years of repeated CR1 or 1st generation use. Luckily, there are now options that make it possible to do a single CR1 cycle then switch CR genetics, as well as herbicide-tolerant canola systems.

Growers who have been using CR1 should consider rotating to alternative clubroot resistant sources. Just as we encourage early deployment of resistance in areas where clubroot might not already be, a proactive approach is the best option here as well. Given that keeping spore loads low is key to managing clubroot, there is no reason to wait for CR1 or 1st generation resistance to breakdown before rotating genetics.

There is a lot of genetic diversity in clubroot populations - 37 identified pathotypes in Canada and counting - so essentially every time the same resistance is grown, the number of rare virulent types may be increasing. Whereas when resistance is rotated, the same virulent pathotype is far less likely to take hold.

If clubroot has been identified on a grower’s land or close by, the goal should be to not grow the same clubroot-resistance genes more than once consecutively. Keep the pathogen guessing by rotating to different CR gene sources and avoid resistance breakdown. This is the best way we can all work together to prolong the effectiveness of all CR and 1st generation genetics and ensure clubroot remains manageable.

Leading the industry in clubroot research and innovation.

Advancements for Western Canadian canola growers over the past two decades. 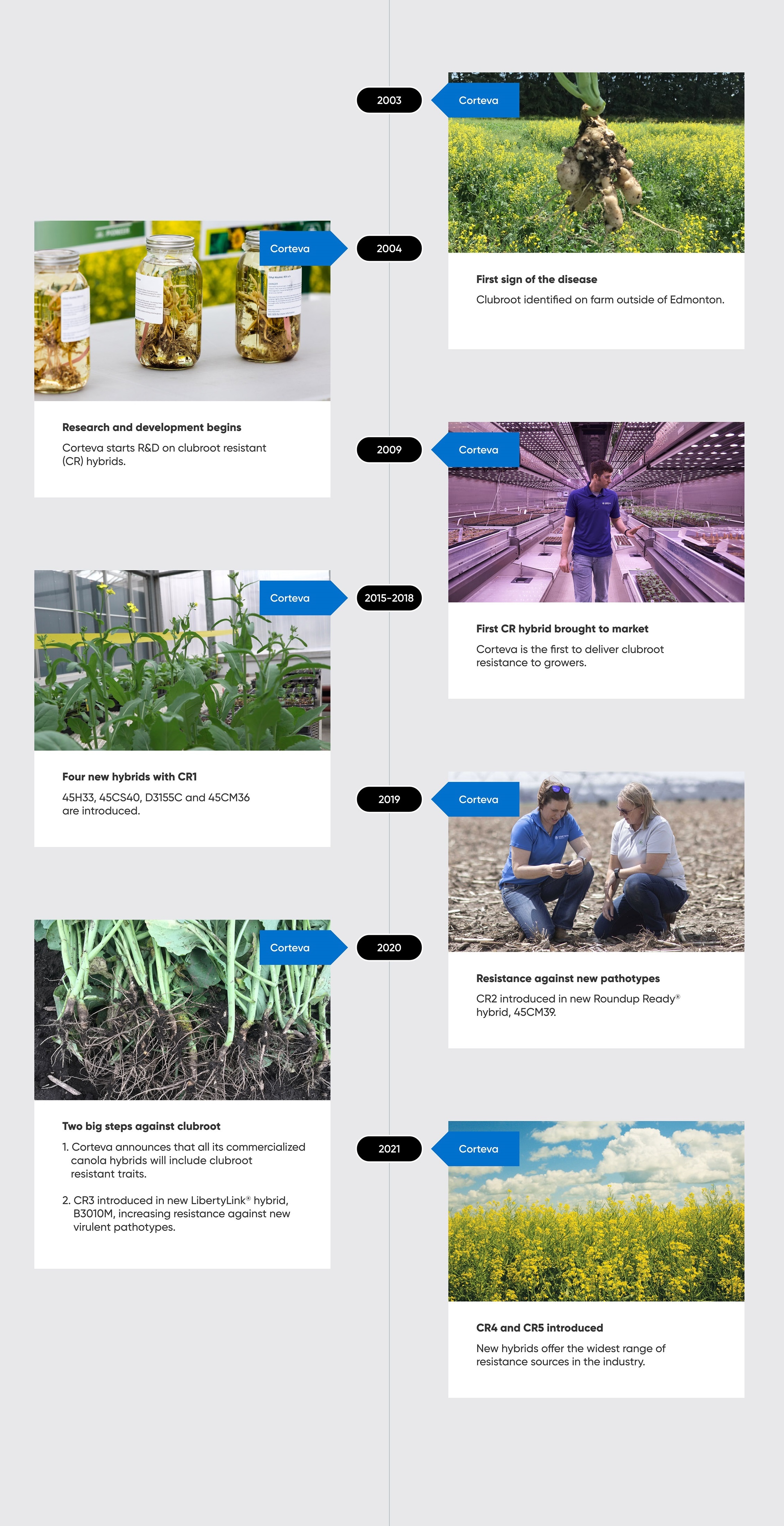 Corteva is the largest company in the world completely dedicated to agriculture. This means when growers purchase our products, they know we’re re-investing their hard-earned dollars into new research, technology and solutions that will support their farming operation.

We know innovation only matters if we make advancements that make a difference on the farm. So, with our multi-year process of identifying new CR gene sources and developing new CR hybrids, we target resistance to the most relevant and predominant clubroot pathotypes. My colleagues and I are in constant collaboration with the public and academic bodies that complete disease surveys across Western Canada. We ensure the pathotypes selected - to characterize our hybrids against - represent as best as possible the diversity of clubroot found across the Prairies.

In 2021, through our Pioneer Protector® brand canola, we released two new CR packages, CR4 and CR5. CR4 delivers a new resistance gene in an effective clubroot stack in the LibertyLink® herbicide segment, while CR5 delivers new genes within a clubroot triple stack of a Clearfield® herbicide tolerant system. Both provide excellent yield, great agronomics and are a robust clubroot management tool that promote CR genetics stewardship.

In addition to offering the option to rotate to multiple herbicide backgrounds, many of our high-performing CR hybrids also protect against other yield robbing diseases such as blackleg and sclerotinia. This provides growers with the choice and flexibility they need to manage their land how they best see fit.

While clubroot is here to stay, so is Corteva. By deploying CR hybrids early and rotating resistance sources often, together we can protect our canola crops from the disease, today and in the future.