Waterhemp: you know it; you hate it. But it sure loves your soybean fields.

Though not native to Canada, waterhemp presents soybean growers with some very real obstacles when it comes to control options.

First, it’s prolific. One plant can produce around 250,000 seeds and that’s if your crop is in competition with it. If it isn’t, or if the weed is growing in an unfettered environment, a single waterhemp plant can produce a million seeds or more.

Second, it’s diverse. Waterhemp is dioecious, meaning it has male and female plants. Only the females set seed, and this gender specificity in reproduction allows for much greater genetic diversity in the offspring. In other words, waterhemp mothers have a lot of kids and they’re all different, qualities that lend themselves to the rapid development of herbicide resistance.

Third, it’s competitive. While waterhemp seeds are very small, they germinate all season long and grow extremely fast, about 2.5 cm to 3 cm per day. It makes waterhemp a constant and constantly moving target when it comes to a well-timed spray regimen.

Waterhemp is native to the US corn belt where it wasn’t considered much of a problem until the early 1990s. Widespread adoption of minimum tillage practices in the late ’80s along with increased reliance on herbicides are thought to be drivers of waterhemp’s “success”. No-tillage cropping systems favour a longer period of waterhemp emergence, and the weed’s own genetic diversity and prolific seed production allow it to adapt to and overcome herbicide controls quickly.

Small seeds mean easy transportation, – in hay, through animals, on trucks, you name it. So, it didn’t take long for the first Group 2-resistant waterhemp populations to show up in southern Ontario in the early 2000s.

Since then, waterhemp populations have proliferated throughout soybean growing regions of Ontario as well as in Quebec and Manitoba. Worse, almost all of these populations have multiple resistance to two or more herbicide groups, with three- and four-way resistance being the norm.

Indeed, if you find waterhemp in your soybean field today, it’s almost guaranteed to be resistant to Group 2 (Amino acid inhibitor/ALS inhibitors) and Group 9 (glyphosate) herbicides – glyphosate resistance was first identified in 2014. In 2017, resistance to Group 5 (metribuzine) and Group 14 (PPO inhibitors) were identified.

The latest herbicide tool to succumb to the adaptive power of waterhemp is Group 27 (mesotrione), when a resistant population was found in Quebec in 2020. That particular population was also found to be resistant to Groups 2, 5 and 9. . More recently, Group 27 resistant waterhemp has been identified in Ontario with some plants exhibiting resistance to 5 different herbicide groups including Group 14’s. While these biotypes are resistant to post-emergence applications of Group 14’s and 27’s, they are still susceptible to pre-emergence applications. 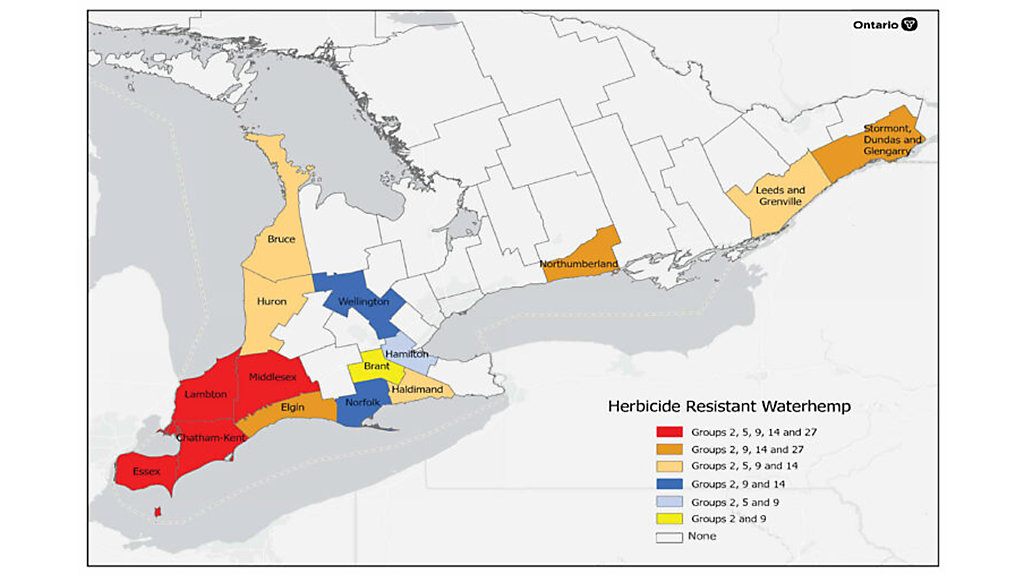 What’s a farmer to do?

Waterhemp is a huge challenge, but one that can be managed with the right knowledge and various techniques including crop rotation and herbicide selection and mixtures with overlapping effective modes of action.

Knowing you have it is one thing. Waterhemp seedlings can look a lot like other amaranth species, like green or redroot pigweed. The plants are extremely competitive if not controlled early – a pre-emergent, residual herbicide at full rate is absolutely critical in this effort.

Enlist Duo™ is a proprietary blend of 2,4-D choline (Group 4) and glyphosate, helping control the most resistant waterhemp populations while taking care of non-glyphosate resistant weeds. For more flexibility, Enlist™ 1 is a stand-alone 2,4-D choline formulation that can be tank-mixed with Liberty® 200 SN, a Group 10 non-selective herbicide, offering two modes of action that all waterhemp populations are currently susceptible to.

Both herbicides can be applied from pre-plant right up to R2, which gives farmers flexibility to control constantly germinating waterhemp. As well, both herbicides come with Colex-D™ technology for near-zero volatility and low drift, meaning they land and stay on target.

Given its adaptability, diversity and prolific nature, waterhemp is not going away any time soon. Understanding the weed, having a plan, and having the right herbicide tools to deal with it are important to holding it at bay. The Enlist weed control system will change how you think about weed management in soybeans, talk to your retailer today.

Hear what soybean growers in Canada have to say about the Enlist Weed control system and successfully managing hard-to-control weeds.