The Western Bean Cutworm (WBC) (Striacosta albicosta) has garnered broader interest in recent years following its range expansion towards the east (Hutchison et al., 2011). In this Crop Insights, we provide perspectives on WBC from our colleagues in the field and review management practices for WBC in corn systems.

Across much of the corn-producing area of North America, WBC is an occasional, secondary pest of corn. However, in favorable environments, WBC is a key pest that can cause significant economic damage. Western Bean Cutworm was first recognized in the early 1900s as a pest of dry beans in the Western U.S. and later discovered in corn production systems. There, it has been managed as a consistent economic threat since the 1960s (Keith et al., 1970). Throughout the 2000s, WBC’s range has expanded eastward where it is now a sporadic pest except in areas around the Great Lakes where economic-level damage can occur. Recent mapping of this pest’s distribution identifies its range and areas of higher risk for infestation (Figure 1). 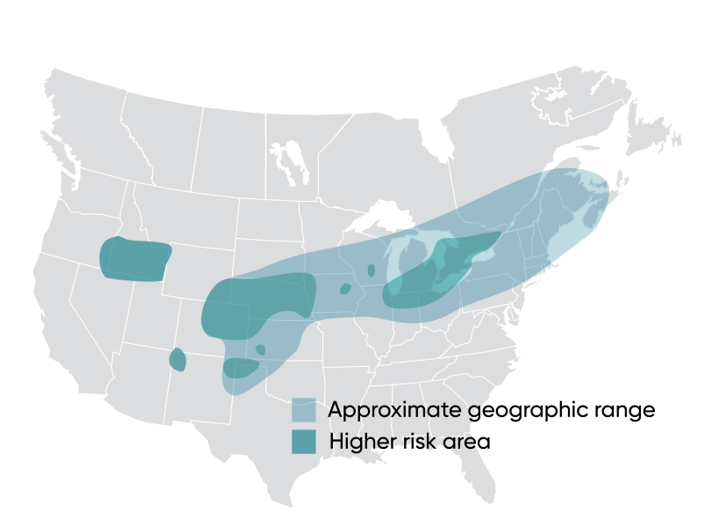 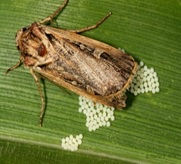 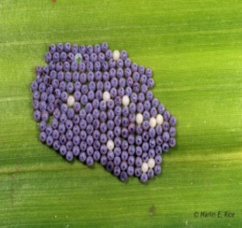 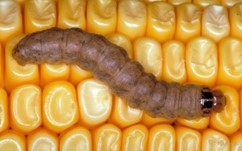 Following adult emergence and mating in mid-summer, eggs are primarily laid in the top half of the canopy on the upper surfaces of new whorl leaves in corn. However, egg masses are occasionally found lower in the canopy on leaves near the ear as well as on the underside of leaves – an observation new to the literature. Over five to seven days, eggs progress from white totan then purple/grey just before hatch (Figure 2). First instars consume the eggshells, thus making post-hatch identification of egg masses difficult (Figure 3).

Larvae can burrow deeper in sandy soils and minimal tillage practices do not expose the pupae to weather. Both of these factors increase survival and have been proposed as potential drivers of their eastward expansion. 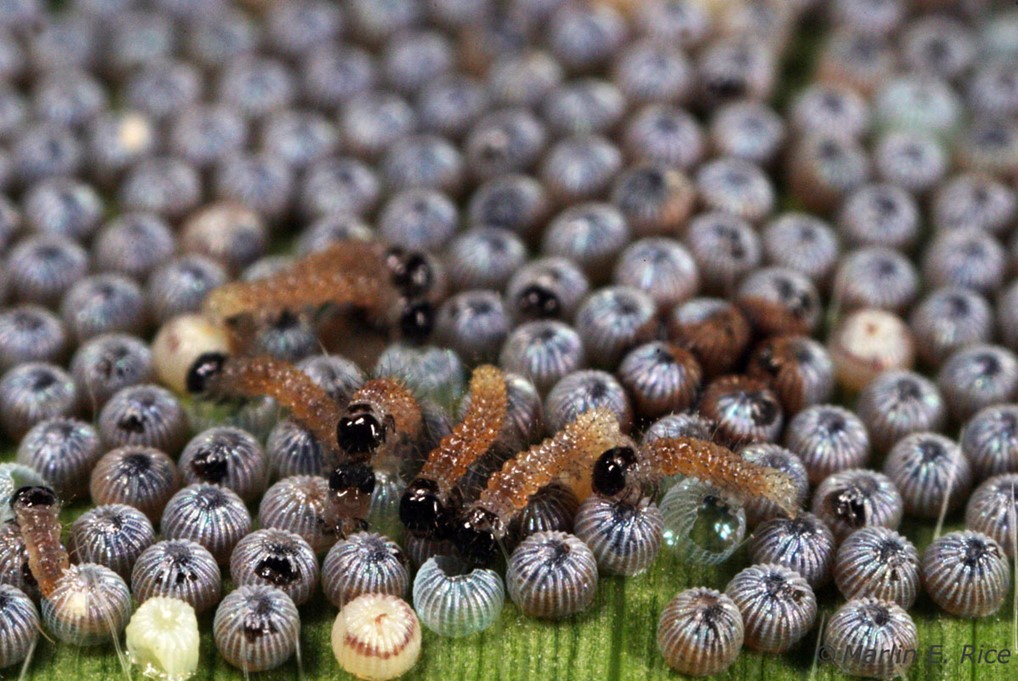 Yield impact remains the primary driver for watching this pest. For each larva per plant on average, yield loss estimates have been reported to reach ~3.7 bu/acre (Appel et al., 1993) to as much as ~15.1 bu/acre (Paula-Moraes et al., 2013) or more (Rice, 2006). In addition to yield loss, a major consideration for areas with higher ear rot pressure is the risk of reduced grain quality resulting from a Western bean cutworm infestation. This pest creates holes in the husk, allowing mold and other fungal spores to colonize the ear, reducing grain quality and potentially producing toxins. In areas with consistent ear mold pressure such as Gibberella or Fusarium, secondary infections may cause greater economic damage than direct yield loss, as infected grain can be a concern at the elevator. The threat of downgraded grain can be enough to justify monitoring the crop and treating with insecticides in addition to a fungicide regime.

Scouting for eggs and larvae in the crop is the best method to determine the necessity and the timing of a treatment.

Naturally, scouting is time consuming and detection success is complicated by the scattered distribution of insects in the field, when present. To make the best use of scouting resources, concentrate efforts during higher-risk periods by tracking moth flights and crop development stage. It is important to note that crop damage has not been correlated with moth flights. That is, high moth flight counts do not necessarily equate to economic levels of crop damage. Therefore, we look for rapidly increasing counts to indicate when field scouting should begin.

Depending on location, moth flight typically starts in late June, ramps up in July and continues into August, especially for areas surrounding the Great Lakes. Peak flight tends to start around mid/late-July in most locations. Moth monitoring data for 2017 and 2018 show approximate peak flight periods (Figure 4) with earlier peaks occurring in more southern latitudes, as expected. 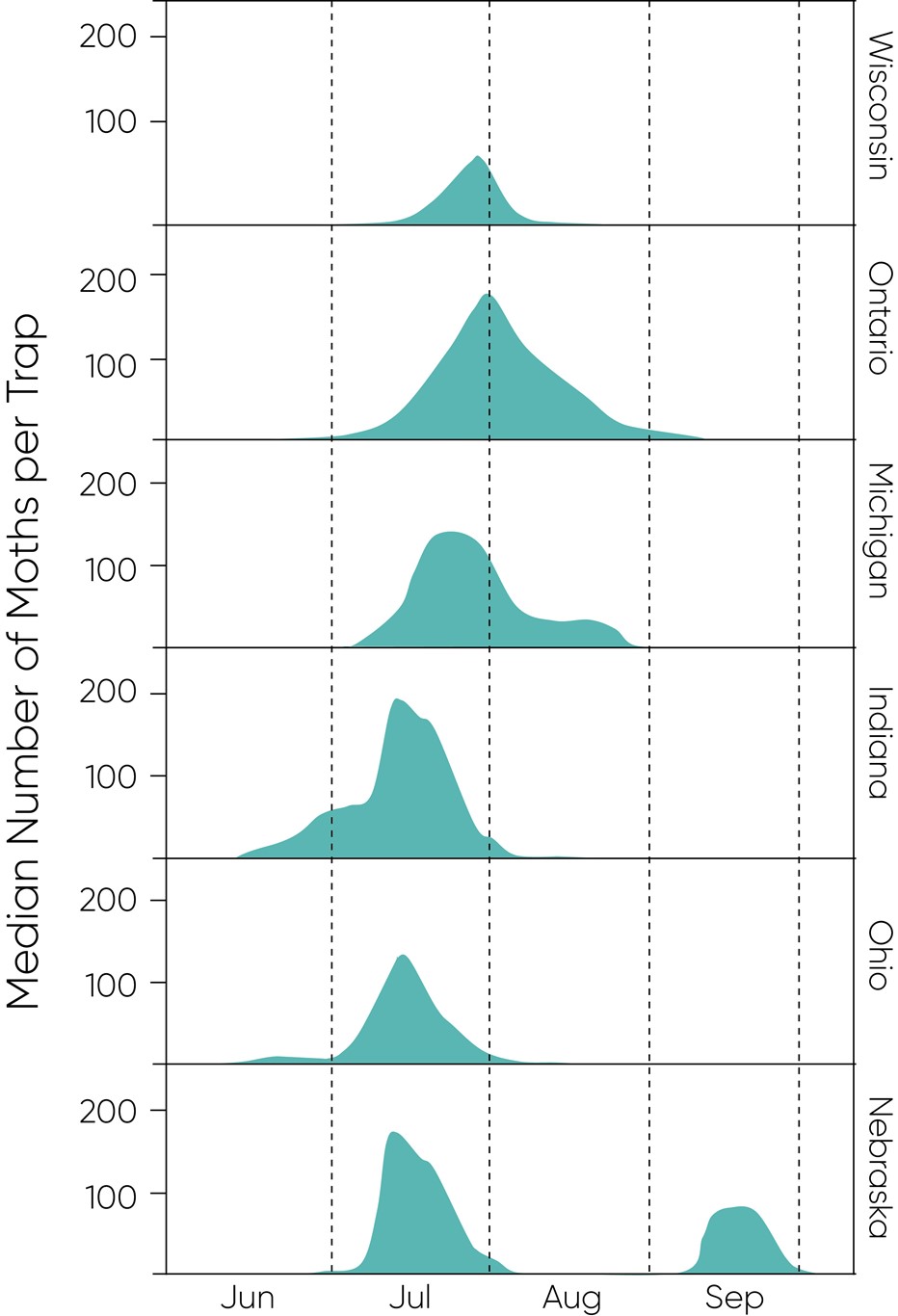 Figure 4. Western bean cutworm pheromone trapping results for 2017 and 2018. Median male moth counts are presented for each state; average counts are shown for Ontario. The second peak shown for Nebraska was observed in 2017.

These plots highlight the relatively long period over which scouting is needed to monitor for the presence of eggs and larvae. The plot for Nebraska showed an apparent second peak in September for trapping stations in the northeast andsouthwest parts of the state – where traps may have detected that local pest population suppression was achieved until management tactics ceased after August. Guidance from our field experts is for farmers to be aware of the sustained flight period that may translate into the potential need for rescue applications throughout August. 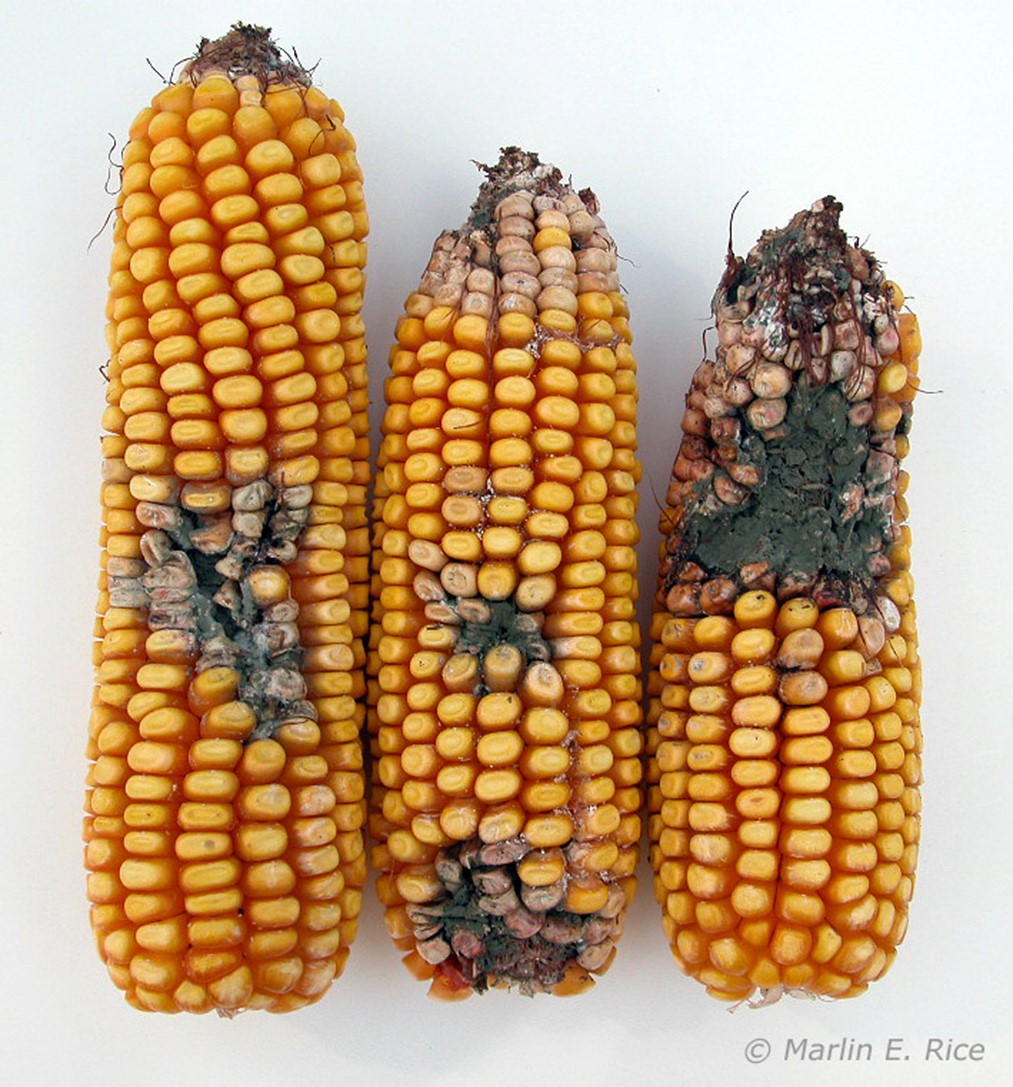 Adult emergence is linked to growing degree days; thus, the timing of the flight season can vary from year to year (Dorhout, 2007). Predictive methods based on accumulating growing degree days can be used to estimate the approximate timing that scouting could begin with the caution that degree day targets may not necessarily align to actual moth flight, especially for more variable environments, such as those in the Great Lakes region (Michel et al., 2010). Variation in seasonal or local weather events can have a significant impact on the timing of moth emergence and flight timing; therefore, we continue to rely on trapping to indicate when the WBC season has begun.

While pheromone trapping captures males only, we expect female abundance to track well with male counts, as females typically emerge a few days prior to males. While some females may disperse long distances before mating or laying eggs, many females may remain local to mate and then find host plants for egg deposition. If a trap count on your farm suddenly spikes upward over two consecutive trapping dates, it is definitely time to start scouting for eggs over the coming weeks.

In areas where the pest is well-established, the absolute number of moths captured is of less importance than the relative numbers; i.e., are counts increasing, sustaining or decreasing?

When peak flight appears to have started, compare this timing to the approaching stage of your corn crop to determine if your fields are likely to be attractive to egg-laying females or if the risk of infestation is minimal. Even if moth counts do not appear to be peaking yet for your region, consider scouting fields if they are tasseling.

Females prefer to lay eggs in pre-tassel corn in order to synchronize egg hatch and preferred larval feeding on pollen, followed by ear feeding. Therefore, if the crop is in the late-whorl stage and approaching vegetative tasseling (VT) and this coincides with increasing trap counts, the risk of WBC infestation (and therefore potential damage) increases. Once scouting is triggered, we recommend the egg mass scouting method to determine if the action threshold is met. Action thresholds can range from approximately 4 to 8% of sampled plants containing 1 egg mass. Even more proactive thresholds (~2%) have been used where the pest is perennially observed and especially if the risk of ear rot is high.

The recommended scouting method for WBC includes checking 20 plants in at least 5 areas of each field. Inspect each plant from the ear leaf on up, looking for egg masses on the top and even bottom sides of leaves. Look for larvae in the axils as well as on tassels and ears. Late whorl stage corn is preferred, but plan to scout regardless of stage during a sustained moth flight. The crop will remain attractive to egg-laying moths throughout the season with the risk of economic damage decreasing in the mid-milk stage as kernels are soon to harden as they mature, becoming less susceptible to damage from smaller larvae.

With significant foliar application campaigns throughout an area, populations may be temporarily suppressed, but given the long period of moth activity, consider scouting fields throughout the season if flight activity continues. In some regions, a second moth peak may take place later in the season. That peak is still part of the same annual generation, but once the majority of insecticide treatments have taken effect, the continued moth pressure is once again seen in the trapping network. These observations are most prevalent in Nebraska and the Great Lakes region where the pest is now a perennial concern. Egg laying later in the season may escape earlier foliar applications and lead to unacceptable levels of ear damage as well as reduced grain quality. In some cases, one application may not provide sufficient protection. A well-timed application is the key to realizing the value of an insecticidal product. Similarly, simply adding an insecticide to an aerial fungicide application may not provide the optimal timing for insect control.

A streamlined approach to monitoring this pest allows for assessment of risk and treatment, if warranted. In areas where WBC is well-established, utilize your trusted detection methods to time treatments and rotate insecticide modes of action to limit the risk of resistance. The action box (below) reflects key phases to consider in developing your program. Contact your Corteva Agriscience™ Territory Manager for additional guidance.

INFORM custom application partners if you plan to contract services for the coming season.

MONITOR adult flights with pheromone traps to decide when to scout.

Use ACTION thresholds relevant to your risk tolerance to inform management tactics. 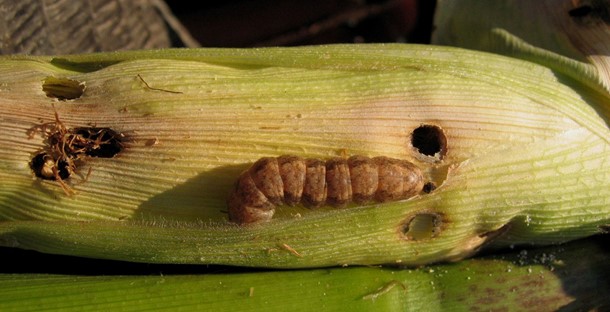 Figure 6. Exit holes made by mature Western bean cutworm larvae that will migrate to the soil to overwinter.

Rice, M. E. 2006. Eastern movement of the Western bean cutworm into Indiana and Ohio. Proceedings of the 2006 Indiana CCA Conference, Indianapolis, IN. 9 pp.

The foregoing is provided for informational use only. Please contact your Corteva Agriscience Territory Manager for information and recommendations specific to your operation.