Nitrogen loss is real. Here, you'll find answers to the most common questions we answer about nitrogen loss and our Nitrogen Stabilizer products, N-Serve & eNtrench.

Yes, nitrogen loss is real. Over 35 years of research and soil test trials conducted show that using a nitrogen stabilizer like N-Serve™ or eNtrench™ can reduce leaching (washing away) by 16% and denitrification (gassing off) by 51% on average.

When nitrogen is stabilized with N-Serve or eNtrench nitrogen retention increases. Corteva Agriscience research trials combined over the past three years show that on average 21% more nitrogen is available in the root zone where plants need it most. This results in canola yields 8% higher, wheat yields 6% higher and corn yields 7% higher, on average.

What happens to applied nitrogen?

After application, nitrogen sources in the ammonium form (NH4+) convert to the nitrate form (NO3-) via a process called nitrification.

Temperature-sensitive Nitrosomonas soil bacteria convert NH4+ to the nitrite form NO2-. Another bacterium, Nitrobacter, then converts nitrite NO2- to the nitrate form NO3-. These soil microbes become more active when soil temperatures reach 10°C and higher.

Soil has a negative charge and does not form strong bonds with negatively charged nitrates. Nitrates not readily taken up by the plant are prone to leaching away from the root zone and denitrification into the atmosphere, and are therefore unavailable for the plant when required.

Crops use nitrogen in two forms: ammonium NH4+ and nitrate NO3-.

What are leaching and denitrification?

Leaching is the loss of nitrates to the soil below the root zone due to rain and irrigation. Since soil and organic matter also are negatively charged, the nitrates are repelled and can be easily washed away, especially in coarse, sandy soils.
Denitrification refers to the loss of nitrogen when soil microbes convert nitrates to gaseous forms that can escape into the atmosphere as a greenhouse gas. Denitrification affects nitrates, not ammonium.

What do Corteva Agriscience nitrogen stabilizers do? How are they different?

What are nitrogen stabilizers and how do they work?

Nitrification Inhibitors inhibit the Nitrosomonas bacteria, which initiate the conversion from ammonium nitrogen (NH4+) to nitrate nitrogen (NO3-).

They slow the conversion of ammonium to nitrate by inhibiting the first stage of nitrification to store usable nitrogen at the root zone. N-Serve and eNtrench are examples of nitrification inhibit

N-Serve and eNtrench, both being nitrification inhibitors, how do they work?

Nitrapyrin is the active ingredient in N-Serve and eNtrench. It inhibits the activity of the Nitrosomonas bacteria for up to 10 weeks. By allowing the nitrogen to stay in the ammonium form (positively charged) longer these products decrease nitrogen loss from leaching and denitrification and instead store it in the root zone for optimal plant use.

Do N-Serve and eNtrench tie up my nitrogen?

N-Serve and eNtrench do not “tie up” nitrogen. They protect nitrogen by keeping it in a positive ammonium form, in the root zone, longer so it is available for plant use and less likely to be lost to leaching or denitrification. They inhibit the nitrifying bacteria allowing the nitrogen to be stored at the root zone for optimal plant use.

How much nitrogen you apply needs to be based on sound agronomics – too much or too little can both cause problems. The key is to apply the proper amount and protect it, for the most efficient use of your investment. Applying more does not ensure there will be enough when the plant requires it (i.e. heavy rains, warm temperatures will increase the speed of denitrification). It’s like having a hole in your fuel tank; you wouldn’t just keep pouring gas in. You would protect the gas in the tank by repairing the hole to stop the loss.

What are the benefits of N-Serve and eNtrench nitrogen stabilizers?

Protect your investment
• Keep nitrogen in the root zone for optimum plant use by decreasing the loss of nitrogen through leaching and denitrification.

Is there data demonstrating the benefits of N-Serve and eNtrench?

Canadian data has proven that there is a consistent yield increase over time by using N-Serve or eNtrench. These yield gains are due to N-Serve and eNtrench decreasing denitrification by 51% and leaching by 16% which leads to an average of 21% more nitrogen retained in the root zone throughout the growing season. 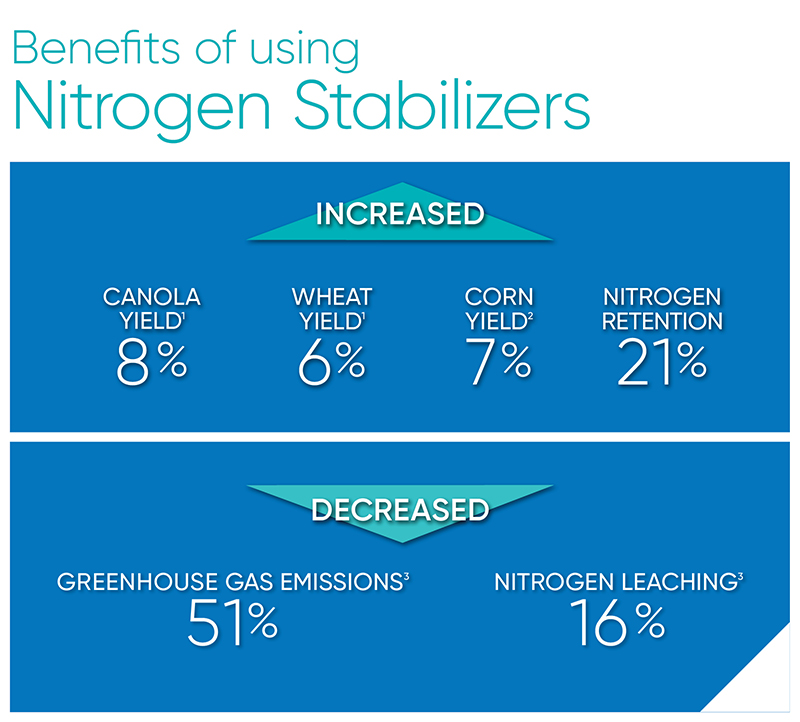 What crops can I use N-Serve and eNtrench on?

N-Serve and eNtrench are approved for use in canola, corn and wheat.

What are the rates for N-Serve and eNtrench?

What is the ROI of using a nitrogen stabilizer?

The price is not tied to the rate of nitrogen used by the grower rather it’s a flat per acre cost which was more than paid back in that 8% yield increase.

Expectations are that single-year gains such as this will increase over time.

The real value in these products will be seen over the

What’s the benefit of nitrogen stabilizers in canola?

What is the price of N-Serve and eNtrench?

Where and when can these products be purchased?

N-Serve and eNtrench are available for purchase at a number of fertilizer retails across Western Canada. Talk to your retailer about purchasing N-Serve or eNtrench. Or call our Solutions Center at 1-800-667-3852 to find a dealer nearest you.

What is the environmental impact of nitrogen stabilizers?

Research throughout North America has shown that nitrogen stabilizers can reduce greenhouse gas emissions (nitrous oxides) on average by 51%. In Alberta there is a carbon credit system in place and other provinces like Saskatchewan are looking at a similar program. We are researching the ability of nitrogen stabilizers to contribute to these programs committed to reducing greenhouse gases.

We have also proven through research done in the US that nitrogen stabilizers reduce nitrate leaching on average by 16%. This can be a significant benefit to farmers who require strict nitrate management to protect water resources

What is the significance of fall fertilizer application?

In the past 15 years, fall nitrogen prices have been on average 18% lower than spring.4 By using N-Serve or eNtrench growers can take advantage of these lower prices plus get a head start on spring’s work – allowing them to seed with confidence that the nitrogen is in the root zone when the plant needs it for optimizing yield potential.

How much earlier in the fall can I apply anhydrous when I use N-Serve?

N-Serve will give you a wider window of application in the fall by enabling you to apply two weeks earlier than usual. Research is ongoing to see if this window can be further expanded.

How do I apply N-Serve with anhydrous ammonia?

A specialized pump delivers N-Serve safely and reliably into the nurse tank.

Corteva Agriscience sources these pumps from a US provider.

Another option is a direct injection system, which meters out the product as the ammonia is being applied and injects it right into the ammonia delivery line (after the heat exchanger but before the splitter manifold

How do I apply eNtrench with my UAN?

Add the eNtrench to your tank as per product label guidelines based on liquid fertilizer amounts. eNtrench mixes quickly and uniformly, and is very easy to use. For larger acres, eNtrench is available in totes.

How are N-Serve and eNtrench packaged?

Should I adjust my nitrogen rate when using N-Serve and eNtrench?

You should always use the recommended nitrogen rate based on your crop’s fertility needs. N-Serve and eNtrench protect your nitrogen investment by keeping it in the root zone longer. It is a tool that allows you to precisely apply the recommended rate with the confidence it will still be there when the plant needs it.

Can eNtrench be impregnated onto urea?

eNtrench can be impregnated onto urea but more research is being done with air drill application to ensure success before we recommend this practice to growers. UAN applications are well understood and will be the focus for Corteva Agriscience.

Where can I source the required equipment?

Contact your Corteva Agriscience sales rep or call the Solutions Center at 1-800-667-3852 to speak to one of our agronomists.