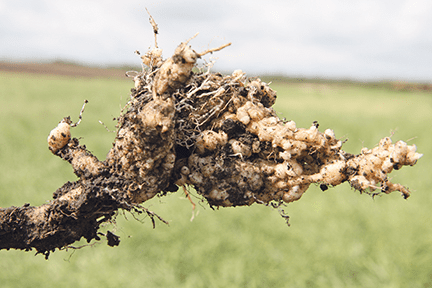 If you do find clubroot in your fields, the best policy is to advise neighbours and local agronomists.

Last year, Doug Moisey, Pioneer Hi-Bred Agronomist with Corteva Agriscience™ watched with concern as clubroot was showing up in northwestern Saskatchewan and the Peace country, areas far removed from ground zero in St Albert, Alberta. This year, he is seeing it spread to more fields, including the latest in the municipal district of Rockyview, south of Calgary. Manitoba and Saskatch-ewan also have increasing clubroot confirmations, and in new areas.

Moisey sees three key reasons for the increase this year:

While there is still uncertainty about how the disease spreads, they do know that soil transmission is the number-one method. It can come from a neighbour’s waterway, with heavy cultivation, a windstorm, or any dirty vehicles with spore-containing dirt clumps.

“There are a number of theories that even an old garden patch that maybe had clubroot in its cabbages or other brassica family of plants could be a source, then with the old garden becoming part of the field, selection pressure started,” says Moisey.

And with the increase in infected fields, agronomists are also finding new races to challenge the latest resistant hybrids.

THE CHANGING RACES OF CLUBROOT

The pathogen is changing and shifting races. New clubroot races this year — 2b, 3 and 5x — are creating more challenges for canola growers.

What does that mean? The standard races of clubroot found in Western Canada are predominantly races 2,3,5 and 8. But through genetic testing, researchers have discovered that there can be variations of the known races. For example, researchers studying fields with race 3, which clubroot-resistant canola hybrids are resistant to, noticed changes and variations of the race. These occur naturally within the family — similar to a redhead in a family of non-redheads. With the discovery of race 3A, it was noticed the current canola hybrids may not have resistance to that race variation.

This is the challenge that seed companies and researchers are facing every year. New varieties take eight to 10 years to develop.

“We have an intensive testing process within our company and work closely with Dr. Strelkov at the University of Alberta to look at new hybrids and how they respond to these new races and understand how it works. As a company we are always looking for new sources of resistance and doing the testing,” says Moisey. “This is another reason why increasing rotations and varieties is so critical to avoid loss of resistance to various races of clubroot.”

HOW TO REDUCE THE THREAT

“We want growers running a sustainable rotational practice, and taking that extra year. The Canola Council of Canada has confirmed that if you discover clubroot in the earlier stages and take at least a two-year break, you can get rid of 90 per cent of spores in your soil pro-file,” says Moisey.

“However, if you’ve got a heavier population where the spores are three feet down, and you have trillions of spores per cubic foot of dirt, you may eliminate 90 per cent in that first 12 inches but you still have that giant spore load you’ve got to get rid of, and that will take longer.”

START BEFORE YOU HAVE A PROBLEM

The increase in infected fields this year is confirming that farmers need to start deploying resistance strategies before they see clubroot.

“But what will happen if you do get a minor infection is that more spores will die than propagate. You are effectively killing off that live spore load.”

In non-clubroot areas growers should be using resistant hybrids, but if they do use non-resistant varieties they must be vigilant. Checking fields at the early flower stage and digging up possible patches of disease, hauling them out in a garbage bag and burning them will minimize the danger of spread because at that stage the galls are very hard and white and have less risk of spreading.

Later removal is less effective. If you go in when swathing in the fall, the galls are starting to break down. “It’s like pulling up a peat moss-style of system and you will actually be spreading more spores. The earlier you start to monitor and verify the better,” says Moisey.

“What we are discovering is that if growers are late in deploying resistance, or if they ignored the problem (or misidentified it), down the road they may find they have 20 to 30 acres affected, and it becomes a much bigger problem to manage.”

Moisey has this advice for growers: “If you have clubroot, be worried about it. Sit down and work on a management plan to minimize the impact. Rotation, management and proper hybrid usage are the keys to managing the growing threat of clubroot.”

Corteva Agriscience™ offers two premium seed brands delivering top-notch hybrids and varieties. Each is tested in local conditions, so we know they deliver the yield and quality you’re looking for.